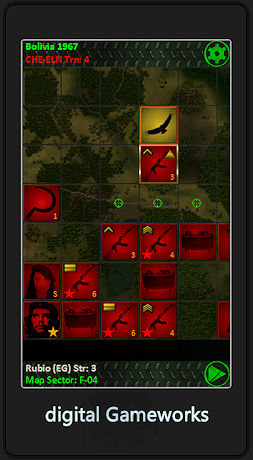 Che 1967 is a 'mini' turn based strategy game that lets you command either the forces of Ernesto Che Guevara's ELN Guerillas or the US Assisted Bolivian Army during Che's ill fated attempt to spread 'La Revolucion' to Latin America by overthrowing Bolivia's Barrientos regime in 1967.

The game starts early in September in the jungles surrounding the Yurro Ravine, Che's hopes of inciting a revolution are all but lost. His only chance of survival is to locate and capture a supply cache containing medicine and communications equipment. Meanwhile, the CIA and US Special Forces assisted Bolivian Army are readying to strike...

Che 1967 is available now for: Android, Kindle, and Windows Apps