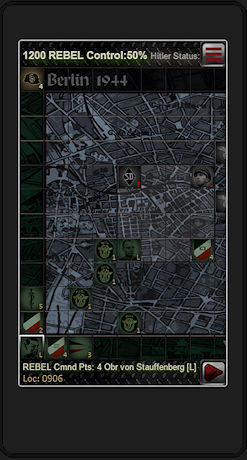 A digital Gameworks mini strategy game for the Web and mobile platforms covering the aftermath of the 20 July plot in 1944 by German army officers to assassinate Adolf Hitler and use the Operation Valkyrie national emergency plan to take control of the country.

The game starts at noon on July 20. Von Stauffenberg's suitcase bomb has been detonated. The Fuehrer Adolf Hitler is thought to be dead. Operation Valkyrie has been put into motion. The dreaded SS under Reichsfuhrer Heinrich Himmler have rejected the decree and moved to seize control of Berlin.

Valkyrie is available now for: Kindle, Android, and Windows Apps